If you’re looking for the German beer festival you’ve come to the wrong place!

The Taylored Cycles Race team has competed in many of the annual Bikefest 12 hour events that have happened every June for the past 10 years. However this was our first visit to the the October 8 hour version.

We just had a select couple of competitors for our first run of the Oktoberfest. They were in the form of Oliver Young and Simon “Temps” Wright who entered the 8 hour solo event. We also had Edd Gowlett who tagged along to get some of the excellent Taylored Cycles race support and he entered the 8 hour solo singlespeed event. Yes, I know, that was a crazy idea.

Edd found us an excellent spot to set up the pit area and show off the new Taylored Cycle Hub sign writing on the van. 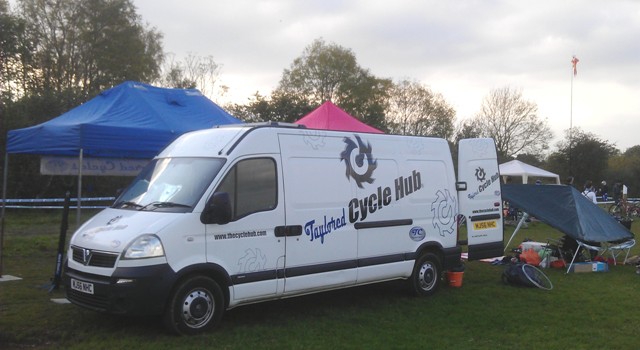 The seemingly fallen over awning wasn’t ours – our neighbours were using it as a pretty effective wind break!

Our intrepid (stupid) solo riders set off to the traditional Le Mans start while I put the finishing touches to the pit area and positioned myself at the corner into the start/finish straight to cheer them past after the initial melee. 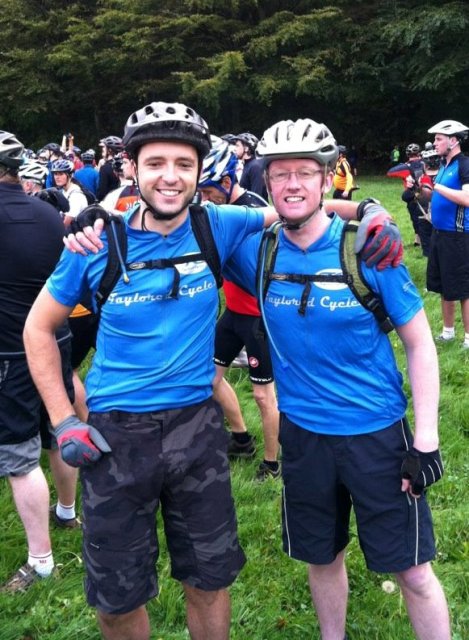 Ollie and Temps in the nervous group of riders about to start all the various different versions of the 8 hour event.

During the race I passed the time tinkering with the bikes of various grateful racers. 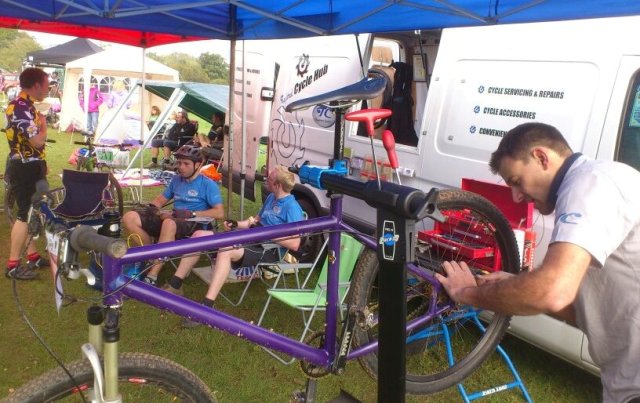 Everybody’s favourite fun bringer Nouveau (Rich Sanders of Sustrans to some) stopped by for me to improve his XT disk brakes while Ollie, Temps and Edd stopped in for some early refreshment. This is his customised purple singlespeed Kona Kula on which he yet again did his part in winning the Team Singlespeed event for LVIS.

As the laps wore on Edd fell by the wayside claiming to be coughing up blood due to his recent and lingering cold. Instead of sitting around and watching the race and getting cold he wisely got on his bike and rode the 2 minutes home and went to bed. 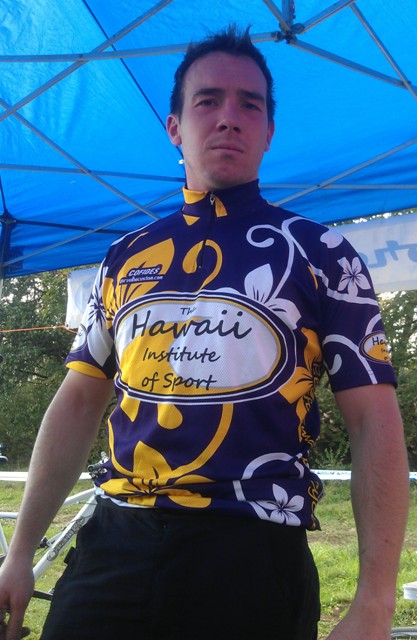 Edd before the lurgy took him. Wearing his new LVIS shirt and NOT one of our lovely and slightly oddly shaped Taylored Cycles race shirts.

Ollie and Temps soldiered on sticking to their pre decided maximum of 45 minutes per lap and associated rest time meaning that they would achieve a very respectable 10 laps or 57.65miles!

The race was the usual well run affair with Paul Newman and his team putting on an excellent event. This time they even managed to attract an impressive selection of big name professional riders: Steve Peat, multiple Downhill World Cup Champion and recent Downhill World Champion was riding with the MBUK Trials star of yesteryear Martyn Ashton and the Rapha Condor pro road team were there with their rider Jonathan Tiernan Locke who won the King of the Mountains in this years Tour of Britain!

The trail in Ashton Court gets better and better and also more and more popular all thanks to the skills of Phil Saxena and his team at Architrail. It is much faster and smoother than ever before.

The only problem with it for an event like the Oktoberfest is that it is pretty narrow and very difficult to overtake slower riders. The Oktoberfest welcomes riders of all abilities, which means there a wide range riders all riding the same trail at the same time as fast as they can. In the past the event has been known as the friendliest in the country and I’m sure that in the pits and most of the time on the trail this was the case again. However much more than in the past the new narrow trail forced some pretty aggressive overtaking moves and we heard of quite a few occasions of slower riders being knocked off their bikes by people pushing past them. Ollie even arrived at the scene of one of these incidents moments after the hit and run had occurred. He stopped and helped the victim up while they wiped the blood off their face – another feature of the new trail surface is that it is pretty unforgiving when skin hits it at speed.

In my opinion the organizers need to do something about this, but I have to admit that I’m not sure what. More frequent instructions for courtesy on the tannoy would be a good start.

Crisps, Minstrels and fake Redbull – that’s what you need!

Towards the 7 hour mark the 10 laps were starting to look a bit like too much hard word for the TC pair but they pulled their socks up got on their bikes and accomplished exactly what they had set out to do; 10 laps which put them 35th and 36th in a category of 59 riders. Pretty good going and not something you’ll see me doing any time soon!

I’m sure that we’ll be back up at Ashton Court racing at either the Bikefest or the Oktoberfest in the next few years, so hopefully we’ll see you there either cheering us on or having a go yourself!