At the end of last year we bought an old Dawes Galaxy from eBay for a relative. Mostly we went for this particular one because of the beautiful old Brooks saddle. The relative in question having actually seen the bike decided that he needed something a lot more upright. Rather than put it straight back on eBay we decided that it was so lovely and had so much potential that we would restore it to it’s former glory.

So now the restoration is completed and it is for sale.

The original paintwork was ruined and the decals were mostly gone. So we got it powder coated (tougher than paint) in the original colour: 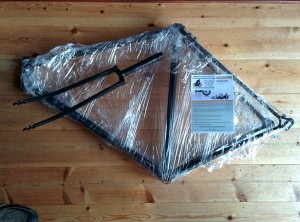 With the cost of the parts, the powder coating and the time taken this was never going to be a very profitable project. In fact it is so lovely had it been the right size there is no way we would have parted with it. But, having had it sat looking nice in our new HQ for a couple of months we now need to sell it. Sad times.

Would you like to own a beautiful bike like this? Go and have a look in Roll for the Soul in Bristol where it is on display. If it is not raining and the guys like the look of you (and you have sufficient ID), they will let you take it for a short test ride to see if you like the lovely smooth way it rides. 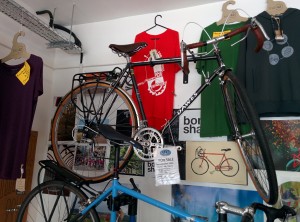 THE BIKE HAS NOW BEEN SOLD