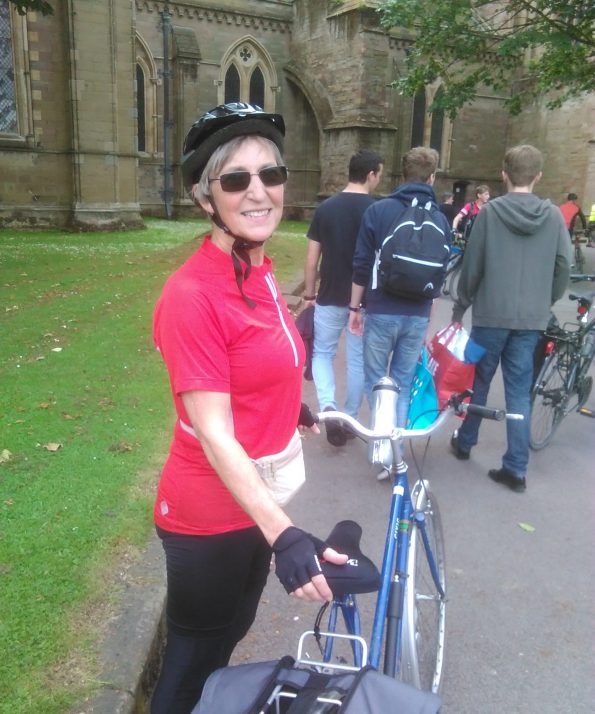 It’s not unusual for us to receive a call out to visit a customer who’d like us to restore or tune up a bike that has been left in a garage with a whole heap of other stuff, and forgotten about for some time.  Earlier this year Timo was called out to Westbury-on-Trym, Bristol, to tune-up Virginia’s bike, and help her on her way with planning a bike trip. Timo tells the story.

Collecting the bike from Westbury-on-Trym

When I arrived at the customer’s house in the hilly Westbury-upon-Trym area of Bristol, I was greeted warmly by Virginia and her husband, who brought out the bike that needed the work.

I talked to Virginia for a bit first asking her about the bike and it’s usage and it turned out it hadn’t been used for some time, but had just been sat in the garage. Virginia wanted to bring it back to life ahead of a social ride to Worcester with friends that she was going on in a few weeks time.

I talked with her about the delights of cycling, and how I thought it was great that she was motivated to do this. As with anyone, I hoped this would spur her on and that her riding would then become more frequent again.

Assessing to see what repairs the bicycle needed

Her bike was a blue Dawes Civic ladies bike, probably from the late 80’s or early 90’s and two things immediately stood out:

Making the bicycle right for the job

I told Virginia that we could change the old 5 speed cassette to a 6 speed Megarange Freewheel, which would in turn require a new wheel for the bike.  This would suit the bike and the rider for what she wanted to achieve, as the new 6 speed Freewheel would essentially give her an extra couple of gears, but also have a megarange sprocket (meaning her easiest gear would be much easier – better for the hills).

Virginia and her husband discussed my recommendations for how to get the bike back in shape, and agreed to my suggestions.

Reciting all the work done wouldn’t make for thrilling reading so I won’t go into detail about that, but the installation of the new parts went smoothly, and once the full service was done the bike felt much easier to ride and looked as good as new.

The bike drop off back at home, and some useful advice

When I returned the bike Virginia asked some questions about maintenance and what she might need for her trip to Worcester (spanner, tyre levers, pump and spare inner tube).  I said I would put some notes on the invoice for her, which I duly did, and wished her well for the ride.

Usually a job ends there, but on this occasion Virginia was kind enough to email me once she’d completed her bike trip to with how she did and she also sent me a picture she’d taken from the trip…

I Just wanted to let you know that I completed the bike ride to Worcester over the three days, 29th to 31st which we reckon was about 85 miles.  The bike was great and despite the rain on Monday afternoon, I thoroughly enjoyed the ride and managed really well.  Thank you for all your encouragement and getting the bike in such tip-top order.  I’ve got the bug now and will definitely continue to ride.

Though we get to work with a lot of fancy bikes, it’s often jobs like these that are the most rewarding as we’re bringing bikes back to life or improving them for a customer to enjoy for many more years to come.

Book a bike collection and repair

So if you have an old bike that’s been confined to the garage for far too long, and are thinking of giving it a bit of TLC and/or refinement, why not contact us to see what we can do for you and take advantage of our collection service.

It could be be the start of a new cycling adventure for you, as it was for Virginia.

Find out more about our prices and how to book our Collection Service.